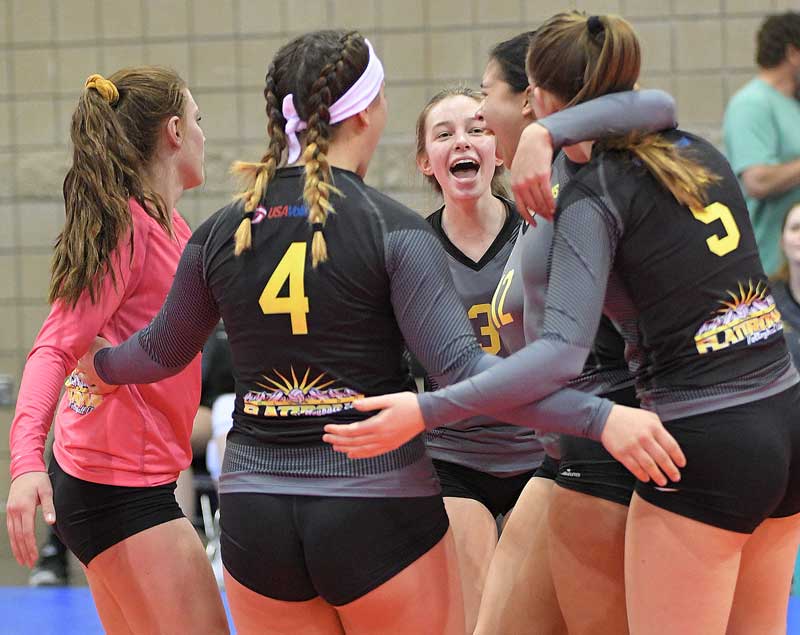 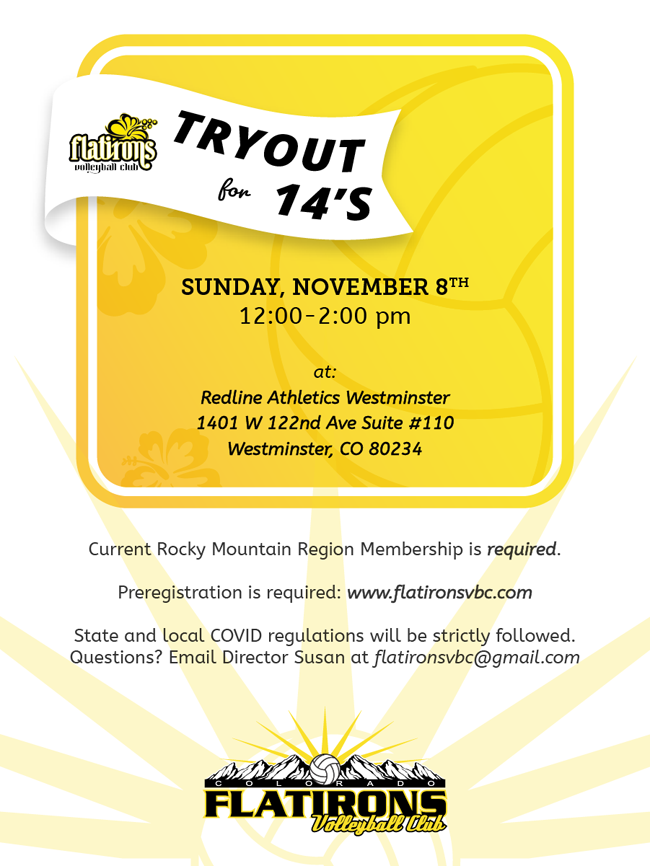 Preregistration is required. Register via the yellow buttons below.

IF THIS IS YOUR FIRST TRYOUT
THIS YEAR:

IF YOU HAVE ATTENDED A TRYOUT PREVIOUSLY
THIS YEAR:

Flatirons VBC is proud to celebrate our 21st season of Jr. Olympic Volleyball. We were founded by teachers who were also passionate volleyball players and coaches.  One of our goals is to elevate volleyball in Boulder County. Our reputation is built upon hiring the very best coaches; they are the backbone of our club. They are dedicated and excited to share their passion for volleyball.  We firmly believe in the importance of life lessons that are inherent with team sports.

Teams practice two to three times a week during the training phase of the season until the competitive season begins on January 2. Practice sites are typicailly Alexander Dawson School in Lafayette, Eldorado K8 School in Superior and Meadowlark PK8 School in Erie. Due to COVID19, the status for gym availability has not year been confirmed.  When the competitive season begins, most teams will practice twice a week when they don’t have a tournament and three times when they do. Practices are typically Monday/Wednesday/Saturday or Tuesday/Thursday/Saturday. Because we rent school gyms, there will be unavoidable cancellations resulting in rescheduling of practice sites and occasionally times.

There are three distinct seasons at Flatirons Volleyball Club. The training season starts in early November through December. The competitive season begins January 2 and runs till April 25.  The post season is for select teams who want to extend their season.  In addition, a separate Beach Program starts mid May, finishing in early August.  This is an extremely fun, optional program for girls wanting to play outdoor doubles volleyball.

Tournament sites are announced the week before the tournament.

All players are expected to attend every practice and every tournament.

There will be tournaments over Spring Break.  Do not book travel until your tournament schedule is confirmed.  Additional fines will be levied for missed tournaments due to reasons outside of illness or family emergency.  Please understand this policy is to protect the team.

The 2021 Fees will be listed in the season contract. Payment plans are available via SportsEngine.  Keep in mind these fees do not cover travel, added/optional tournaments, post season, USA Volleyball Membership or the 2021 Season Registration fee.

Flatirons VBC participates in the Safeway and King Soopers Grocery Gift Card program.  Safeway awards with 5% of your purchases which are credited to your player’s fees.  King Soopers awards approximately 2% of your purchases to be applied to your player’s fees.  Parents submit a report to Flatirons showing their reward amount.  This is done quarterly.